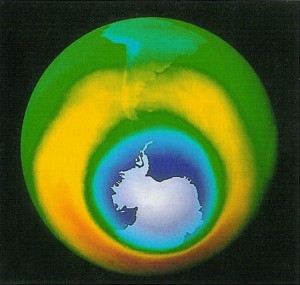 Professor Main Geophysical Observatory . Igor A. Voykova Karol , stressing the importance of this natural phenomenon in the Arctic indicates that this time it has been observed not only over the North Pole , but advanced to the Eastern and Central Siberia. That is, there is a risk of movement on populated areas .

The ozone layer , which protects the Earth from the destructive effects of cosmic radiation , is reduced to three mm Antraktide in October-November ( there the spring) . In the layers at the height of about 20 km above the earth having a lower than normal temperature. They lead to the formation in the upper atmosphere of active chlorine compounds , which are the main ” fighters ” ozone. “Ozone is known to be formed and destroyed in the atmosphere ,” – says I. Karol and calms, – “However, at this time the sun is low , so the flow of UV that causes skin cancer, not great.”
Vice-President of the Russian Geographical Society Kirill Chistyakov offers reinforce fears in connection with ozone holes . These fears policy biznesmny and sometimes the scientific community uses in its ienteresah for certain preferences and money for research . Phenomenon is the enormous scale of the Earth and also required extensive and lengthy observations to predict its future behavior.

It is believed that even the term ” hole” was coined in order to create a budget agencies such as NASA. “We prefer to say ” spring negative anomaly reduce ozone ” – says the scientist from his understanding of the Arctic and Antarctic Research Institute Alexander Makshtas .

However, scientists do not rule out such effects as the appearance changes the circulation of air flows , surface temperature and ice melting . This can pose problems for polar bears , which will begin to roam. “But it has happened many times – says K. Chistyakov – These types have not gone away – they are not going anywhere now.” As for the man with his irrepressible economic activity , “we have no choice but to adapt ,” – he says.

Speaking as one of the possible causes thinning of the ozone layer , the massive air emissions of Freon , professor of weather forecasts State University Sergey Smyshlyaev emphasizes that the Montreal Protocol was operating , emissions are reduced , and 50th years century atmosphere returns to normal. Scientist expresses sentence: “We need monitoring. For example, in Finland at the same time with the weather forecast given the situation on irradiation with ultraviolet light , which just depends on the ozone . ”

With the warming of the atmosphere after the spring cooling ozone is formed , say scientists .