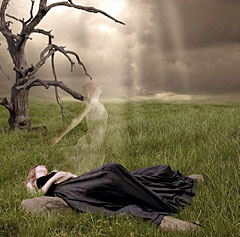 ” … So, I left my physical body forever. Although I left him every day for a few hours , but always came back – it was called sleep. And this time I threw it all – that, as worn old clothes no longer wear … ”
” I am leaving the world of dense ”

So in its philosophical and mystical work ” Seven legends of planetary humanity ” Nicholas Roerich described the moment of death. Philosopher marked his phrase, mysterious to the layman , but understandable dedicated : ” I ​​am leaving the world of tight .”

According to esoteric teaching , dense world – the visible world . By dense bodies and relates the physical human body that represents the set of chemical elements and designed to contain the body of life , the desire body and the body of thought – the three bodies together constitute the human soul.

From the standpoint of medicine a person’s death is cardiac arrest , cessation of respiration and brain work , after which begins the decay of biological tissues , called decomposition. According to the same esoteric , it is the soul of the output of a dense skin and leads to the destruction of obsolete material human body.

How to find the most paranormal researchers and scientists, mystics , the main reason that the soul , or, according to Buddhist teachings , the Atma leaves the corporeal shell – perform its main tasks before the soul Logos shortly before her earthly incarnation . In rare cases, this is because of the magical effects wizards who ” lured ” the soul of the victim’s body, and as a result of misuse of secret practices of astral travel , when poorly trained adept initiates output of the soul from the body , not having the strength and experience to get her back after this material in the shell.

path of the soul

Thus, the mechanism of release of the soul of the human body running. Externally , on the material plane , it can be expressed in its death throes .

At this time, the invisible etheric substance – atma , before there was a person in the solar plexus leaves his ” earthly home .” In some cases, it happens instantaneously. Then it is believed that the deceased was clean and easy soul , and about a similar death say ” God forbid everyone.”

Often, however, the process takes more time : ethereal and formless substance of the soul rises up inside konvulsiruyuschego body to break out through the so-called Brahma Hole – invisible energy hole in the back of the head man.

Once out of disembodied soul for some time connected with her energy thread, or as they say , “silver spiral.” This situation is described survivors of clinical death .
After some time, the thread is broken , and from that moment in the body begin to happen, irreversible changes.

Once torn astral connection between the atma and body, the soul of man , which has turned into a tight energy clot, sees all his earthly life in reverse order from the last days before the birth .

This event plays a crucial role in the ” training ” of the soul , helps dispassionately analyze everything in life and committed to a new stage of its karmic evolution. Weeping over the lifeless body resonant distracts from the contemplation of Atma instructive pictures , which could adversely affect its next incarnation .

Other dangerous for the soul of the deceased actions have spread over many thousands of years in different nations and cultures – cremation and embalming the body during the first days after death. When performing these procedures , together with the destruction of the physical body is destroyed and energy-information view, much-needed shower , gazes into his earthly journey .

Great harm has already withdrawn from the physical body also attempts to bring the soul of physicians and loved ones of the deceased back to life .

Until the connection is interrupted

However, not all CPR contraindicated soul , leaving a dense world. Without much harm to the immortal Atma this can be done only until until it exploded “silver spiral .”

Such cases are repeatedly described in the literature and confirm the postulate of medical tight timelines resuscitation process . In particular, Andrei Makarov from Izhevsk remembers the incident that happened to him in 2007, when he was in a serious car accident .

Once checked out of the oncoming jeep turned in front of his car , Andrew felt a strong push at the beginning and then a sharp, but short-term pain. When I came to myself, to my surprise , I saw her body , surrounded by a group of doctors who tried to resuscitate him . Andrew soon felt himself starting to blow up somewhere , while he himself seemed remarkably easy and peaceful. Makarov soon realized that he was attracted to the milky- white light flickering somewhere ahead . It flew quite a distance , until I realized that some force is trying to get it back .

This discovery is the first moment upset Andrew, since he knew that ahead of him waiting for freedom from worries and experiences. A moment after Makarov found his motionless body rapidly approaches it . Here it is, like a vise , squeezed on all sides , severe pain shot through every cell , and in the next second, Andrew opened his eyes.

Death is not haphazard

Viktor Vasnetsov . ” After the Battle of Igor’s Polovtsy .” 1880 Sudden death on the battlefield denied the opportunity to consider the soul panorama previous life

On the concept of “premature death” accepted to death on the battlefield , from the accident , crime or fulminant disease. However, esotericism and the followers of the teachings of karma believe that death is never accidental or premature . Famous phrase from Scripture that not a hair falls from the head of the person without the permission of the fact the Almighty , very accurately describes this postulate . But in each case, such a death has its own peculiarities.

For example, the soul of man who died at the hands of a criminal or an accident , avoid Purgatory rapidly – in the first minutes after the release of the biological body – getting ( this also applies to the souls of dead children) for so-called first heaven ( there is also a second , and third ) , where there is love and bliss.

Sudden death on the battlefield, more than any other running against the natural laws of the universe , the soul deprived of the opportunity to consider the panorama of his life on earth and therefore relegated to the stage for a long time the next reincarnation . Moreover, rapidly released from the dense body, the soul for a long time experiencing the horrors of unnatural death of his biological containers .

According to American psychologist Elizabeth Kubler -Ross observed for two decades for dying patients , only 10 percent of people who were on the verge of death or death experiences , could clearly remember what happened to them in that light . Other researchers call larger numbers – 15 to 35 percent. According to surveys , half to make the transition from life to death is psychologically ready to participate again in this sacrament . A quarter of them expressed great regret that they had to be back in our mortal world .